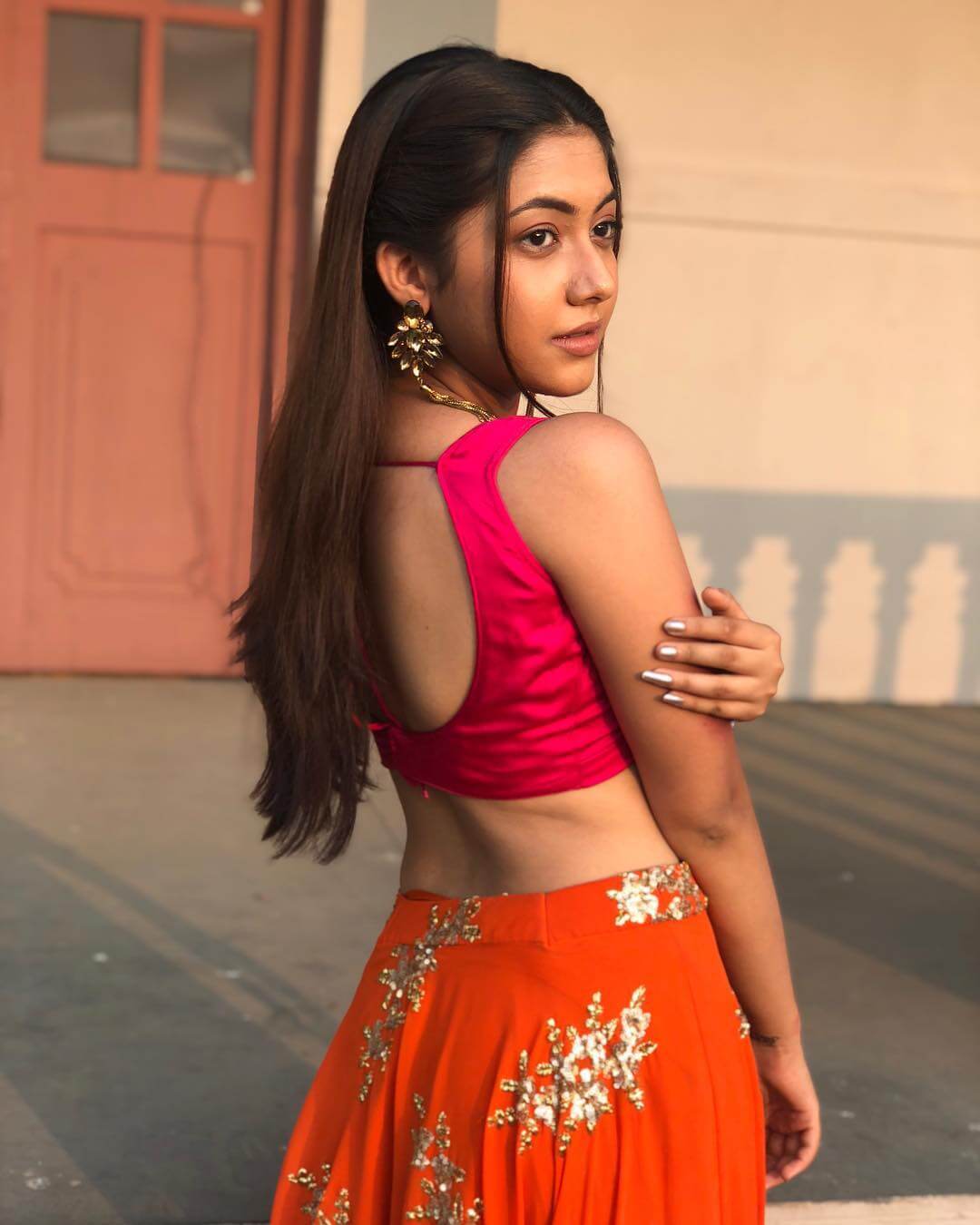 Reem Sameer Shaikh, better known as Reem Shaikh is a 19-years old Indian actor and model. With multiple TV shows, movies, and music videos under her name, she is one of the most successful actors of her age. Still, in her teen years, Shaikh has already attracted millions of fans via her exceptional talent before the camera. She started her career in the entertainment industry at the super young age of 6.

Yes, you read it right!

Actress Reem Sameer Shaikh entered the entertainment industry when she was 6-years old. Fast-forward 15-years and she is a household name in India. Currently, Shaikh can be seen playing the protagonist against Zain Imam in Fanaa – Ishq Mein Marjawaan. The show airs on Colors TV.

Over the years, Reem Sameer has worked in several popular TV shows and movies She hails from the state of Oman located on the coast of the Arabian Peninsula. This piece by Lemony Blog talks about Reem Sameer Shaikh and everything that you need to know about her. The post discusses Reem Shaikh Age, biography, early life besides Reem Shaikh boyfriend, and dating life.

Known for – Actress and Model

Who is Reem Sameer Shaikh?

Reem Shaikh is a renowned Indian Television Actress. She has starred in many popular TV series, movies, and music videos. Other than this, Shaikh has appeared in over 100 TV commercials. The actress also played the character of Malala Yousafzai in her biopic movie, Gul Makai. Reem’s work in Gul Makai earned her loads of appreciation from the critics.

Although the actress started her road to a successful career in 2006, she rose to attention after her work in Neer Bhare Tere Naina Devi. The show aired on Imagine TV in 2010. She played the role of Devi Lakshmi in the mythological series. Besides her work on the small screen, Reem Shaikh is also a prominent model. The beauty is best known for her easy-going personality.

You may also like – Melyssa Davies Bio, Net Worth, Lifestyle, etc

Reem Shaikh hails from the Middle-Eastern State of Oman. She was born to her parents Sameer Shaikh and Sheetal Shaikh 2002, on September 8. However, citing professional reasons, Mr. and Mrs. Shaikh moved cities across Mumbai, and Maharashtra soon after Reem’s birth. Presently, Reem and her immediate family reside in Mumbai.

Shaikh’s full name is Reem Sameer Shaikh. She is a reputed actress and model with numerous TV series and movies under her name. Reem is a Virgo. She and her parents have faith in Islam. Born in Oman, Reem Shaikh is an Indian citizen. We do not have the exact details about her ethnic origin. Rumors have it that she is a South-Asian Omani. The 19-years old actress is a perfect blend of modern, traditional, and easy-going personality.

She visited the Gyankendra School in Lokhandwala, Mumbai to complete her schooling. No update about her further education is available to the masses. Keep reading to know Reem Shaikh’s Age and other information.

Reem Shaikh is an immensely well-established actress. This fact alone made her fans wonder about the Reem Shaikh Age. Here’s what we found about her age.

Reem Sameer Shaikh was born to her parents in the year 2002. Her father Sameer Shaikh and mother Sheetal Shaikh welcomed their first and only child in Oman. Years later, their daughter grew up to be a successful actress. As of April 2022, Reem Sameer Shaikh is 19 years and 7 months old.

Actress Reem Shaikh is a gorgeous beauty from the entertainment industry. And might we add, she is an equally talented professional in her league. She has an aura and personality that attracts millions. Here’s what we know about her physical appearance

Reem Shaikh Height in Feet – Reem Shaikh’s height is estimated to be somewhere around 5 Feet and 2 Inches.

Actor Reem Sameer Shaikh Height in Centimeters/Meters – Her height in centimeters is 157cm.

Reem Sameer Weight – Though we do not know Reem’s exact weight. It is estimated to be somewhere around 55 kg.

Skin Tone – She is a fair-complexioned girl.

The reputed actress Reem Sameer Shaikh, prominently known as Reem Shaikh, was born in an upper-middle-class Muslim Family in Oman. The actress spent the initial years of her childhood in her hometown. Her father Sameer Shaikh is a businessman who owns a printing press in Mumbai, Maharashtra. Reem’s mother Sheetal Shaikh is a homemaker. Due to business reasons, the Shaikh family had to move to Mumbai when Reem was still a pre-teen.

Reem was brought up in the Lokhandwala region of Mumbai amidst comfort and luxury. She was admitted to the Gyankendra School to pursue her schooling. Shaikh is believed to be attending a private college to complete her graduation. However, we do not know the factual details about the same.

Regarding her family background, we found that Reem is a South-Asian Omani. She lives in a family of three which includes Reem and her parents. She has no siblings or pets.

If you are curious to know about Reem Shaikh’s Boyfriend, this is a must-read section for you. Here we have discussed the dating life of your favorite celebrity, Reem Shaikh. The reports reveal that Reem Shaikh is single. She is focused on her career and is not seeing anyone. She is not revealed to be in a romantic equation with anyone.

However, back in 2018, Reem Shaikh was rumored to be dating her co-star Sehban Azim. The duo played the protagonist in the TV show ‘Tujhse Hai Raabta’. The netizens speculated Azim and Shaikh were in a romantic relationship. The speculation rose when the duo started dedicating social media posts to each other frequently. While the audience loved the couple’s on-screen chemistry, their rumored commitment attracted quite some controversy.

The controversy was due to the wide age gap between Azim and Reem. While Reem is still 19y/o, Sehban is 35. Not that age matters when there’s love enough to conquer the odds. In an interview, Reem Shaikh declined all the rumors stating that she and Sehban are just good friends. The revelation put an end to all the dating rumors about Reem and Sehban.

As of now, Reem Sameer is not dating anyone.

Profession, Net Worth, and Lifestyle

Having started her career at the tender age of 6, Reem Shaikh has grown up to be a perfect lady with an equally perfect career. She debuted in the industry as a child artist. Her first job was to be a model for a photo shoot when she was six. The job earned her 300/-INR.

At the age of 8, Reem grabbed her debut show called Neer Bhare Tere Naina Devi in 2010. In the show, she played the role of Goddess Lakshmi. Having attracted quite some attention with her role, Reem received several offers. In the following years, she worked in numerous shows including:

The actress also starred in multiple music videos. She made guest appearances on several TV shows. Besides these, Shaikh worked in three movies. Her debut movie was the Amitabh Bacchan starrer Wazir. In Gul Makai, she played the role of Malala Yousafzai. Her next big-screen project is Tuesdays and Fridays.

Coming to Reem Shaikh’s net worth, we found that the model-actress earns a decent income. She has a net worth of $2-5Million. The actress charges 15-25lac/- INR for each movie project. Reem earns a paycheck of about 30K/- INR per episode. Being born into an upper-middle-class family, Reem never lacked affluence. However, her life after success synonymizes an even better life amidst comfort and luxury.

Reem Shaikh never misses a chance to connect with her fans. As a result, she is frequently seen sharing aesthetic posts on her social media profiles. On Instagram, Reem Shaikh has over 4.5 million followers with 483 followings and over 1200 posts. Her Instagram profile is @reem_sameer8.

She has worked alongside some prominent actors in the entertainment industry including Hina Khan, Dipika Kakkar, and Ulka Gupta.

Shaikh did a guest appearance in the Amitabh Bacchan starrer Wazir.

Reem has appeared in more than 100 TV commercials including Maggie, Clinic Plus, and McDonald’s.

Her favorite actress is Jennifer Winget.

Her celebrity crush is Justin Bieber.

Who is Actress Reem Shaikh?

Reem Sameer Shaikh is an Indian actress best known for her work in the TV show Fanaa – Ishq Mein Marjawaan.

Who is Reem Sameer Dating?

In 2018, Reem was rumored to be dating her co-star Sehban Azim. However, the actress denied the same in an interview.

Who is Reem Shaikh’s Boyfriend?

Reem Shaikh is single as of now. She is currently focused on her career. She doesn’t seem to have a boyfriend.

What is the Reem Shaikh age?

Why is Reem Shaikh Famous?

Reem Shaikh is a model turned actor. She is famous for her TV shows.

Who is Reem Shaikh’s Best Friend?

Actress Reem Shaikh and Avneet Kaur are believed to be best friends. The netizens can often see them encouraging each other on their social media handles.

Yes, Reem Sameer Shaikh is an Indian actress. She was born in Oman.