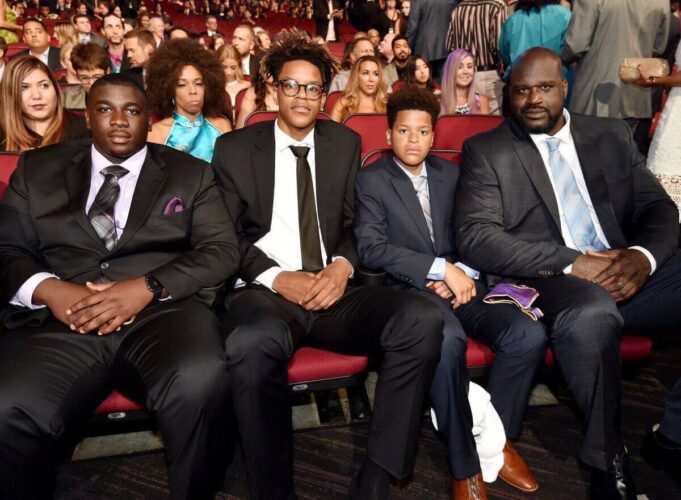 Myles B. O’Neal is a name that has become the center of attention for quite some time now. This 25-years old boy from America is the new aspiring model and actor that the fashion industry awaits. With his awesome vital stats and attractive look, Shaunie O’Neal’s oldest son has lately become the new definition of a “Tall, Dark & Handsome” man.

Read this Post from Lemony Blog to find out everything that you need to know about Myles. Scroll until the end to dig into interesting facts about Shaquille O’Neal’s son. Not just this, but also read about his family, education, career, net worth, girlfriend, relationship status, achievements, and more.

We have answered some frequently asked questions about Myles B. O’Neal. So, without any ado, let’s move ahead and discuss Myles O’Neal’s biography.

Known For – DJ, Entertainer, Fashionista, and Son of Shaquille O’Neal

Myles B. O’Neal is the new Television personality of the era. He was born on the 8th day of May 1997 to the global TV personality Shaunie O’Neal. Many of his fans may not know but Myles was initially not known by the last name, O’Neal.

For many years after his birth, he was known as Myles Nelson Baptiste. He took this name from his biological father.

Yes! You read it right.

Shaquille is not Myle’s biological father. Myles had to change his legal name when his mother married Shaquille O’Neal in 2002. His complete name Myles B. O’Neal is read as Myles Baptiste O’ Neal.

You Should Read- Rylee Martell Biography

Although Myles was brought up in Atlanta, Georgia, he was born in Los Angeles. He is an American citizen. He comes from an Afro-American ethnic background. While some of the celebs these days do not follow any religion, Myles has faith in Christianity.

First his appearance on television in 2010 was in a reality TV series called Basketball Wives. The show premiered on his 13th birthday. In 2016, Myles appeared in the premiere of the family show of his family called ‘Shaunie’s Home Court.’ Shaunie O’Neal’s son, Myles began his modeling career when he was 21 years old. Read more about O’Neal’s modeling career in the later sections of the post.

Myles B. does live in quite a complicated family which is interesting to read about. His parents are Shaquille O’Neal and Shaunie O’Neal. But Shaq is not Myles’s biological father.

Myles is born to Shaunie from her previous relationship before she married Shaquille. Besides his parents, Myles shares his family with his five siblings. All of Myles’s siblings are his step-siblings. Shareef and Shaqir O’Neal are his half-brothers while Amirah, Me’arah, and Tahirah O’Neal are his half-sisters. His father, Shaquille is a basketball player from Fame National Basketball Association.

While Shaq is still Myles’ legal father, he separated from Myles’ biological mother a long ago. O’Neal’s parents separated following a divorce in 2011.

According to Shaunie, she and Shaquille are still good friends. She said that the two will love and care for each other forever. Shaq and Shaunie love their family a lot. That being said, the ex-couple loves spending time together. Shaunie quoted, ‘In Shaquille’s mind, I think I am always gonna be his wife even though that’s not the case. The love is always there and he’s one of my best friends. We have a great time together and our kids love just being a family.’

Shaq treats Myles just like his biological child. He loves and adores him.

The 6’3” tall aspiring fashionista has been able to grab decent attention with his god-like looks and charming persona. He is widely popular as the son of Shaunie O’Neal’.

Brought up in Atlanta, Myles completed his high school at Crossroad High School.

To enter the entertainment industry as an actor and filmmaker, the oldest O’Neal son studied acting for 4-years. He completed his graduation in acting from Santa Monica College.

How old is Myles B. O’Neal?

Unlike what his god-like physique indicates, Myles is quite young. He is still in his mid-twenties.

Why is Myles B. O’Neal Famous?

Myles B. O’Neal is primarily famous as the son of the former Basketball player, Shaquille O’Neal and television personality, Shaunie O’Neal.

Myles is an American television personality, Disco Jockey, and entertainer. He is one of the most renowned celebrity children in his age group.

Myles B. O’Neal is the son of a powerful couple from America. His father, Shaquille O’Neal is a former basketball player. Senior O’Neal is regarded as one of the greatest basketball players of all time. Presently, Shaq is a sports Analyst on ‘Inside the NBA.’

Shaq is also a successful actor. He has more than 18 films under his name. The actor and sportsperson Shaquille has also been featured in over 30 television series.

Myles’ mother, Shaunie O’Neal is a popular television personality. She is an entrepreneur and philanthropist. She married Shaq in December 2002 in a private ceremony at the Beverly Hills Hotel. The couple parented four children together while dating and in their marriage.

In 2009, the couple filed for divorce citing irreconcilable differences.

Talking about who Myles B. O’Neal is dating now, we discovered that his dating life is a mystery.

As per our research, Myles is 25 years old. He is currently single. He had been in 1 romantic relationship in the past.

However, Myles has been persistent in keeping things private. As a result, the name of the lucky girl who dated Myles is not known. Though committed, Myles never got engaged to his partner. As of now, he is loving his singlehood. He is ways away from any relationship rumors and hook-ups.

Shaunie O’Neal’s son Myles B. O’Neal started his modeling career at the perfect age of 21. His first runway walk was for Dolce & Gabbana’s Spring at Milan Fashion Week in 2018.

With his ethereal looks, Myles in no time grabbed loads of attention from the bigheads of the industry. In the early years of his career, he walked not just for D&G but also for many other International brands. He walked for Elie Saab, Ports 1961, Givenchy, Turkey, Balmain, H&M, No21, Fendi, Alexander Wang, Chenal, Diane von Furstenberg, Donna Karan, Vera Wang, Michael Kors, Marc Jacobs, Oscar de la Renta, Giles Deacon and the annual Dosso Dossi Fashion Show held in Antalya.

Myles has several brand endorsements in his account. He endorses clothing brands Marc Jacobs, Michael Kors, Vera Wang, Donna Karan, H&M, Alexander Wang, and Diane von Furstenberg. Graduating in acting helped Myles discover his interest in the entertainment industry. He followed his passion for music and became a Disco Jockey. He inherited this interest from his father Shaq, who is also passionate about DJing.

Myles is undoubtedly loaded with wealth. With so many runaway walks and brand endorsements in abundance, he has earned himself some good figures. His current net worth is estimated to be around $ 5 million. However, there is no exact figure revealed of his net worth.

Although Myles rules over the hefty fortune of $ 5 million, his father Shaq is said to be the owner of over $400Million whereas his mother Shaunie has a net worth of about $40Million. Shaquille is a professional sportsperson while Shaunie is a TV personality besides being an entrepreneur, producer, and philanthropist.

Myles has not been in any rumor or controversy so far.

Myles B. O’Neal is active on Instagram. His official account on the platform has more than 250K followers.

Popular worldwide, Myles has been into the internet trends for many reasons. His fans and followers are always keen on knowing more about his personal life. Here are the few frequently asked questions about Shaunie O’Neal’s son, Myles.

What is Myles B. O’Neal’s Marital Status?

Well, Myles B. O’Neal is currently unmarried. He is also not engaged to anybody as of now.

Who is Myles’ Girlfriend?

Myles has been in one relationship before but opted to keep his personal life under covers. He thus did not reveal the name of his girlfriend.

How Many Kids Does Myles O’Neal Have?

Myles does not have any kids. Presently he is focused on his career and is seen enjoying his single status and seems to be in no hurry to marry or have kids.

How Old is Myles O’Neal?

Who is Myles’ Partner?

Myles is single and thus he does not have any partner presently.

Who is Shaunie O’Neal’s Son?

Shaunie O’Neal has 6 kids of her own 5 of which are from his marriage with Shaquille O’Neal. However, her oldest son Myles B. O’Neal is from her previous relationship. Myles is also popular on the internet as Shaunie O’Neal’s son.

Why is He Famous?

Before starting his career as a model, Myles was famous as TV personality Shaunie O’Neal’s son.

No. Myles is alive and is all healthy and fine.

Who is Myles O’Neal’s Biological Father?

Although Myles carries his legal father Shaq’s name as his surname he is not his real son. Myles was born from Shaunie’s relationship before Shaq. However, his father’s name isn’t revealed.