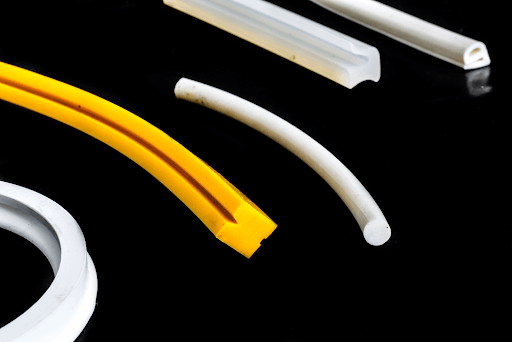 Rubber parts, including seals and connectors, are integrated into nearly every commercial and consumer product. Environmental factors, including the stresses, strains, and exposures to things such as the sun or chemicals, drive the design of the rubber product, from material selection to custom mold shapes.

Packing joints are a common seal to block the path of liquid or gases. This can be to keep air from escaping, such as in scuba gear, or from air entering a beverage delivery system to pour the perfect head-on beer. A custom-designed gasket can keep heat inside the oven for the perfect souffle. Rubber parts are often an integral part of your DIY project, such as rebuilding that vintage car engine or fixing a leaky water faucet.

A Brief History of Rubber Products in Modern Manufacturing

Humans have used natural rubber throughout recorded history. Natural rubber remained the material of choice despite the discovery of synthetic rubber in the mid-19th century. While natural rubber, sometimes referred to as latex, was in common use well into the 20th century, it had a lot of limitations. This included freezing in the winter and melting in the summer.

Rubber was a critical part of everyday life, which accelerated to include more products, such as car tires after Charles Goodyear discovered how to cure natural rubber in the late 1800s. Synthetic rubber had been elusive, with slow and incremental development in the formulation and ingredients to design a suitable replacement for natural rubber on a large scale. But during World War II, the United States and its allies could no longer access its usual natural rubber supply in Southeast Asia. A collaboration of rubber-producing companies resulted in the development of synthetic rubber produced at an industrial scale and helped to win the war. Today, about 70 percent of rubber used in manufacturing is sourced from synthetic material.

Whether sealing fuel on a rocket engine or keeping your vegetables fresh in your refrigerator, rubber plays an important role in modern society. In some applications, such as aerospace and medical industries, the reliability of rubber parts, seals and connectors can mean life and death. Rubber is used in various industries, including but not limited to aerospace, automotive, fiber optics, hydraulics, pharmaceutical, medical and military applications.

Apple Rubber has expertise in using various base substances and developing customized formulations and shapes. Their engineers are leaders in developing formulations and processes to complete customized projects from concept to prototype to full production. They are a trusted partner in providing reliable quality products from off-the-shelf to fully customized products. Fluorocarbon, also referred to by its ASTM D1418 designation as FKM, is an example of this.

As with all rubber formulations, it’s critical to understand the environmental conditions, including the likely failure mechanisms, that the rubber product is expected to perform. FKM rubber has outstanding chemical resistance properties, so it performs exceptionally well in the presence of solvents. FKM also performs well at very high temperatures, including in the presence of steam. While this material is typically not selected for its low-temperature capabilities, changes to the formulation can result in significantly improved low-temperature performance. This material is used universally across many sectors but is particularly in demand for aircraft engines and for automotive fuel handling systems.

Taking Rubber Products Into the Future

Rubber’s role in the future is only expected to expand. From humble beginnings, synthetic rubber is an integral part of everyday life. Whether or not you think about rubber products, they make modern necessities from medical devices to airplanes possible.