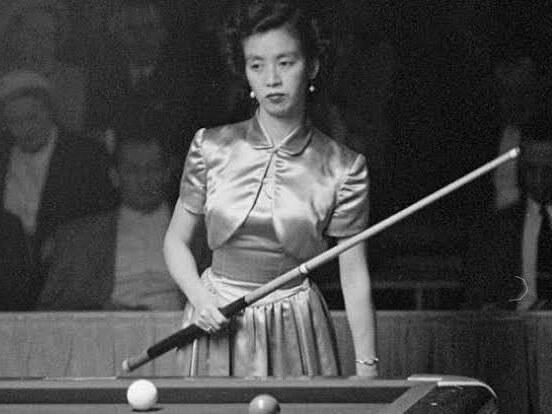 Masako Katsura was born on 7 March 1913 in Tokyo, Japan. She is a celebrity pool player. Her husband is Vernon Greenleaf. Former professional pool player nicknamed “the first lady of the pool”. In 1952, she became the first-ever woman to compete for a world title in three-cushion billiards. Masako Katsura’s life number according to numerology is 6.

Masako Katsura has been called “the first lady of the pool”, winning one title after another, despite condemnation and criticism, she became the first woman to play pool professionally. People came only to admire her and left amazed by her talent and the unbeatable tactics of the game. This amazing woman deservedly entered the world billiards hall of fame and proved to the world that a woman can compete on the same level as men in this intellectual sport.

She was born on March 7, 1913, in Tokyo, Japan. Her nickname is “Little” and even she was well-known as Katsy as a child. She had three sisters and a brother. Her father died when she was only 12 years old and then Katsy went to live with her older sister and her older sister’s husband, Tomio Kobashi.

She first learned to play pool from her brother-in-law named Tomio Kobashi, who owned a pool club. As a teenager, she began working there and perfecting her craft.

Masako Katsura’s life number is 6, and life path number 6 is associated with lots of love, affection, care, and humility. She is someone who likes to serve humanity for a greater cause. She has a lot of empathy for those who are weak and suffering.

Why is Masako Katsura Celebrated With Google Doodle Honors?

Google celebrates Katura’s historic achievement of becoming the first woman to be included in an international pool championship. Google chose this day, March 7, because it was the day Masako Katsura made history at this tournament in 1952. Today’s Google holiday logo shows an example of a three-cushion pool table in action.

This is an even tougher version of carom billiards, requiring the cue ball to hit at least three cushions before hitting two target balls to score points. By the time Katsura moved to the United States in 1937, word of her extraordinary talent had reached eight-time world champion, Welker Cochran.

Welker Cochran organized the World Championship Billiards tournament in 1952 to watch him compete with the world’s leading pool aficionados.

Katsura upset some of the sport’s top players to finish seventh in the tournament, while the progress she made for women in a traditionally male-dominated game was a first.

She was a great player before her marriage and won two major awards before she met her husband. Her husband was an American soldier in the US Army. Her husband’s name is Greenleaf, she became more famous at that time after marrying the US Army and in 1950 she got her husband as a non-commissioned officer.

She returned to the competition again in 1961 and took up her game with the same passion and zeal. She played a tough match for the World Three-Cushion *le against her worst enemy team. And then she’s the reigning world champion and she’s also been beaten by her. She disappeared from the sport for a while before making a brief and inevitable reappearance in 1976. Katsy returned to pool and carom around 1990 and died in 1995.

This saying was taken from her famous interview and we ended up extracting it from Jimmy Cannon’s interview and then from her interview published in Byrne’s Advanced Technique in Pool and Billiards (1990). “I train two times every day before opening the hair salon.  And every day I practiced there, I soon started to play with many men of this world. Many men wanted to defeat me. I play for men, six, seven hours a day. Most men like me, they don’t hit me. If I hit anything good, my brother-in-law comes up to me when the pool closes and then he says this shot is not good or this shot is bad, I will make a good shot or a bad shot. He tells me everything. There weren’t that many good players in this game. And I have a sister too.”

In 1937, she met Kinney Matsuyama at a championship and they became friends. She has won the Japanese National Three Cushion Championship several times. Kinrey Matsuyama was also the 1934 U.S. national champion and runner-up three times, then had four second-place finishes in the world competition with an 18.2-point score before World War II.

Kinrey was impressed and began teaching her the rules and techniques of the game at the highest level. By 1947, she was a long-established billiards star in Japan and then became the country’s only professional number-one player.

Q. Who is Masako Katsura?

Masako was a famous billiard and carom player. And she was the first player not only in Japan but in the whole world. She became the first female champion.

Q. Why is She Famous?

Masako is known for her great performances in carom and pool tournaments and competitions. She has 3 competitions.

Q. How Many Times have Masako won the Championship?

In 1952, she won the tournament and the world championship in three-cushion billiards.

Q. What is her Date of Birth?

Q. What is the Name of her Hometown?

Her hometown was Tokyo, Japan.

Q. What Is Her Brother-in-law’s Name And What Is His Occupation?

Masaka’s brother-in-law was a very pious man and owned a billiard parlor in Tokyo. However, he also knows all the skills and techniques of pool and carom. And his name is Tomio Kobashi.

She played billiards, pooling, and carom in Japan.

Q. What Do You Know About Masaka’s Legacy?

It was featured in Google’s holiday logo on the search engine’s homepage and also became a special part of International Women’s Day.