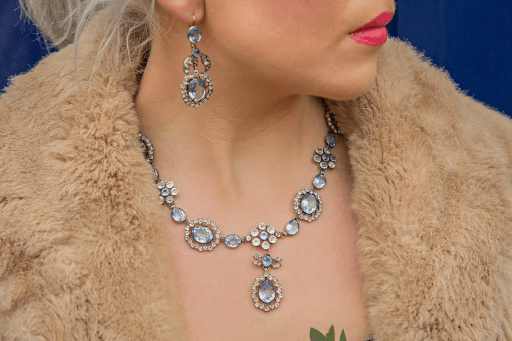 Georgian jewellery is sometimes ignored in the midst of more popular eras like the Victorian, Art Deco, and Edwardian. In any case, the Georgian era is a fascinating one, and its jewellery exhibits the extraordinary skill and craftsmanship for which it is renowned.

In What Period Of Time Is The Georgian Era Of Jewellery?

In spite of the fact that historians disagree about exactly which monarchs were in power during the Georgian era, the broad view is that it included the reigns of George I through IV. King William IV reigned from 1714 until his untimely demise in 1837, at which point the Victorian era began.

Handcrafted luxury is the hallmark of Georgian design. The reign of the Hanoverian kings served as a major source of style inspiration throughout this time period, although there are other features from France and Germany present. Additionally, Georgian styles spread to the United States, drawing on American freedom as well as French Revolutionary-era inspiration.

Neoclassicism and romanticism can both be seen in Georgian design. All of this contributes to the richness, grandeur, and opulence that characterise Georgian style.

What To Look For When Purchasing Georgian Jewellery:

The most appealing aspect of Georgian jewellery is that each piece is one-of-a-kind. In spite of these differences, there are several characteristics that help distinguish Georgian jewellery. Jewellery made in the Georgian style often incorporates the following traditional methods:

Another distinctive element of Georgian jewellery is the use of closed-back settings or foil-backing on gemstones to enhance their radiance and scintillation.

Handcrafted Georgian jewellery features a wide variety of metalworking techniques. During the Georgian era, jewellery was given a dramatic makeover by incorporating metallurgical methods such as;

Cannetille is a technique for creating a woven, lace, or spiral effect by twisting metals.

Using hammering on the reverse side to imprint or create a raised impression for a 3D texture look, repoussé is another common technique.

Excavations at Pompeii and Egyptian artefacts discovered during the Georgian era are two notable examples. It was usual to see Roman-inspired motifs like grape leaves, keyholes, and laurel, as well as Egyptian-inspired papyrus leaves, in fashion designs.

Styles like Rococo, ornate, and lavish were fashionable, as were themes like feather plumes, ribbons, and bows. Georgian jewellery was frequently decorated with flowers, greenery, and leaves.

Jewellery From The Georgian Empire:

Genuine Georgian jewellery can be difficult to come by because of its age and the fact that it was made using highly sought-after materials and gemstones.

In Georgian times, chokers and dog collars were popular for necklaces because of their high necklines. Individually mounted gemstones connected together to form a strand of jewels have always been and continue to be popular.

Customizable and interchangeable, parure jewellery included necklaces, bracelets, brooches, and even earrings, all of which could be worn as a necklace or an earring. Jewelry owners were given a wide range of possibilities to choose from thanks to this new technology. It is becoming difficult to find a complete set of vintage jewellery, but individual pieces are still sought up by collectors.

Wearers of chatelaines could attach a variety of embellishments to the belts they wore, making them both beautiful and functional. Even writing implements like pens and pencils could be stored in the chatelaine. Because ornate elements from chatelaines were generally removed and reimagined as pendants, it is uncommon to locate a whole chatelaine.For more antique jewellery check out Susannah Lovis London.