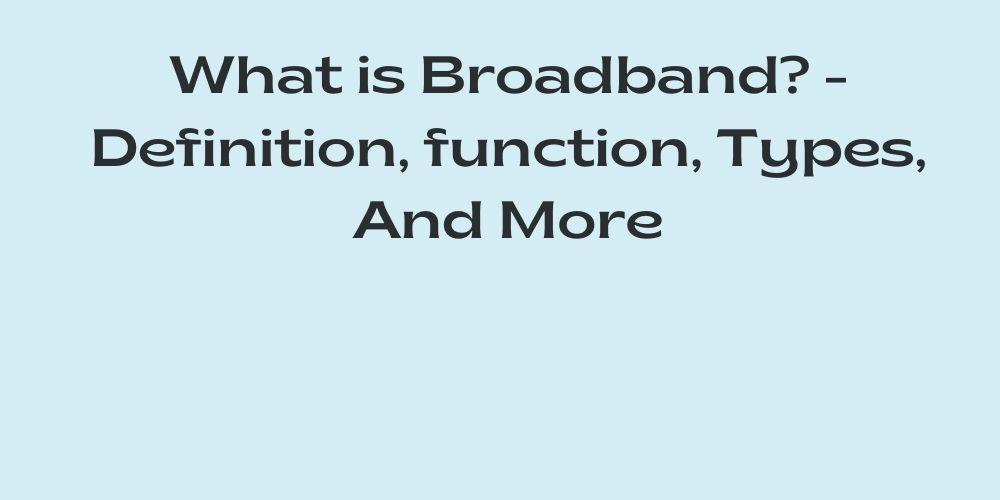 Broadband internet, which was launched in the 1990s, provides several advantages over traditional dial-up connections in terms of connectivity, speed, cost, and efficiency. Many ISPs such as Windstream internet provide the fastest speed broadband internet connection for homes and offices. Different sectors have greatly improved their work productivity as a result of these internet services.

How is Broadband internet different from Non-broadband Internet?

Broadband connections operate over a similar infrastructure but end many limitations of the conventional dial-up network. While both dial-up and broadband connections are available to the users, consumers prefer the latter. Following are some basic ways broadband gets an edge over non-broadband internet.

In a dial-up connection, since the computer code is transferred as an analog signal, the speed with which it may be transmitted is limited by the system’s capabilities. In general, the larger the file being transferred, the longer it will take to send.  The highest speed achievable with dial-up is 56 kbps and there isn’t much that the dial-up consumers can do to improve the speed of their connection.

On the other hand, there isn’t a defined maximum speed limit that can be achieved by broadband internet. Each type of broadband connection has its speed and there are improvements made every day to increase the threshold even more. According to the Federal Communications Commission (FCC), the minimum download and upload speeds of a broadband internet connection are 25 Mbps and 3 Mbps respectively.

DSL (Digital Subscriber Line) is a technology that transmits data over standard copper telephone lines. The transmission rates of DSL-based broadband range from a few hundred Kbps to millions of bits per second (Mbps). The distance between your house or business and the nearest telephone provider facility may affect the availability and speed of your DSL connection.

Instead of copper wires, cable broadband uses coaxial cables. A copper wire is encircled by a concentric conducting shield and separated by an insulating layer in a coaxial cable. Coaxial cables are a better alternative to standard copper wires because their shielded construction allows the center conductor wire to carry data efficiently while being safe from external interference or damage. Depending on the type of internet subscription, cable broadband speeds range from 20 Mbps to 300Mbps or above.

Fiber internet is many times faster than traditional internet connections, and its speed, bandwidth, and overall quality are rapidly improving. A cable loaded with glass fibers is used to power this sort of internet. These microscopic fibers are superb conductors, allowing them to carry data at fast rates and with the widest bandwidth conceivable. The maximum speed you can achieve with fiber optic internet is around 950 Mbps to 1 Gbps, making it about 20 times faster than the traditional cable connection.

What are the Broadband ISPs near Me?

With the advancements being made with the broadband internet connection, many ISPs are providing the service all over the world. In the USA there are some of the best broadband internet providers including those enlisted below you can check their availability in your area by searching with your zip code:

The Internet has become a necessity in today’s digital world. People are not only looking for their gadgets to be connected, but they are also becoming savvier in their connection selection. Broadband internet is a technological innovation that has eliminated the traditional dial-up connection. The elements that distinguish a broadband connection from a non-broadband connection, its sorts, and the major broadband internet service providers are discussed above to help you acquire an astonishingly fast and consistent internet connection today.