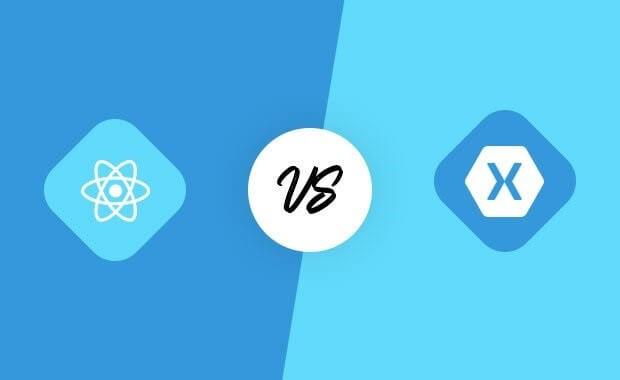 In the context of mobile app development, both Xamarin and React Native are worth mentioning. To specify, these framework prospects are suitable for cross-platform development. This implies that developers can utilize either choice comfortably to create apps that work with one code, compatible with both Android and iOS operating systems. Read here about the best cross-development mobile development tools in 2021.

Statistics show that in 2020 alone, there were 218 billion app downloads globally; this count increases at a 7% rate per year. To gain higher profits in the app development industry, you must choose the best tool first. Both React Native, as well as Xamarin, have multiple astounding qualities.

Learn about them completely to know which would prove beneficial for your app development projects.

React Native is one of the most popular choices for cross-platform mobile frameworks available today. Statistics show that 38% of developers worked on their mobile app development projects using React Native in 2021. Its origin comes from Facebook and it has been in operation since its March 2015 release.

A recent statistic shows that the mobile app market saw 34+ billion downloads of React Native-centric apps. There are 31 thousand and counting such apps in account currently. Instagram and Walmart are two notable companies working with React Native frameworks for their app development projects.

Xamarin is highly acclaimed as one of the best cross-platform frameworks for mobile app development. It came into being in 2011 under the leadership of Novell. Later, Microsoft took the company over in 2016 and adopted Xamarin for the Visual Studio setting. To note, this open-source tool is useful for creating iOS, Windows, as well as Android applications for mobiles.

Xamarin works well with the C# coding language, so developers need to have a strong understanding of this first. Statistics show the market graph of Xamarin has grown over the years, with 1.6+ million developers using it across 120 countries. Many brands practice it for app development.

Common clients include organizations in healthcare, energy, media, and transport industries, among others. Notable names that utilize the Xamarin framework are GitHub, Slack, and Trello.

Differences between React Native and Xamarin

Both options provide a vast range of benefits and work with different APIs and programming languages. Here are more differences between both Xamarin and React Native, in further detail.

Both frameworks work in different capacities when it comes to achieving their goal concerning app development.

React Native was made to work as a simple UI toolkit for developers. One can make small-scale reusable components using this framework. Plus, its toolkit can effectively run with higher-order components as well.

HOCs are useful for developers to prepare different components with similar functionalities in terms of coding. For UI development in mobile apps, this is one of the most usable React Native app services. Furthermore, it works with JavaScript, which has a dynamic nature of its own for coding.

On the other hand, Xamarin mainly focuses on API compatibility and coding. So, the framework specializes as such. Users can reuse 75% of the code they develop to structure apps suitable for the three chief mobile platforms.

However, compared to React Native, it is not very flexible in terms of developing customized controls. C# and XAML are efficient for UI component building, but they work mainly to wrap existing controls, not create them.

One of the key benefits of React Native development company is its flexibility. Developers find this highly useful for their development tasks and can choose among different types of pre-set text editors and IDEs.

React Native, in particular, works with many IDEs as well as Text Editors present online. Examples include Nuclide, Visual Studio Code, Sublime Text, Atom, GNU Emacs Editors, and Vim Editor. You are at the liberty to select any of them as per your preference.

In contrast, developers working with the Xamarin framework must focus on Visual Studio only. It has a development environment that integrates with the development projects of users. You would get access to many layouts, controls, and tools here. Hence, creating an app with this framework is not that difficult despite the lack of diversity.

One of the best features in cross-platform development is Just-in-time or JIT. This allows developers the opportunity to compile all source code or bytecode during app runtime. The Android operating system does not block JIT access to any cross-platform app development framework but iOS does.

As for React Native as one of the frameworks in question, it cannot utilize JIT with iOS. So, if there is a need for any source code modifications, developers focus on the Android-based code. They make necessary changes here, and then apply the code for iOS apps.

In contrast, Xamarin uses a different tactic. You can hire mobile app developer teams with Xamarin and they would use the specialized AOT (Ahead-of-time) for compiling their source codes.

This compiler type analyses all bytecodes carefully before compiling them into machine language. Then, they execute it for this process. As a result, the app performance improves while the startup time decreases. The only drawback is the file size which increases in volume. Here, the developers would configure AOT first before beginning the compilation task.

React Native is compatible with modular architecture. Here, the development team for apps would compartmentalize the code into several functional blocks. This works with one-way binding, and also operates with manual data binding tasks. The latter is useful for decreasing unnecessary errors.

Xamarin, in comparison, utilizes a Model View ViewModel (MVVM) architecture with two-way data binding compatibility. Collaboration is easier between different departments thanks to this architecture.

In case you are following a performance-oriented approach or cannot determine it for sure, utilizing this shall prove effective. It ensures flexibility in processing and quick completion.

React Native has a high market share, with dominance in different industries. Statistics show that 29% of companies use React Native to build apps related to Computer Software, 5% for the Internet, and 18% for Information Technology and Services.

Xamarin, on the other hand, is a common choice for startups and enterprises alike.

Generally, firms that have 10-50 employees in their workforce and approximately $1-10 million revenue can invest in this framework.

Common companies that utilize Xamarin for app development include Cognizant, BOSCH, Slack, Honeywell, and JetBlue. Statistically, its market share in terms of apps is 6.8% and 0.21% in case of installs.

Both frameworks work well to generate apps that resonate well with customers.

React Native offers ready-made UI toolkits like Shoutem and React Virgin for making native user interface (UI) components. However, it does not adapt well to the constantly upgrading native component demands for iOS and Android apps.

While the elements React Native toolkits prepare are useful, it is not easy to develop a native user experience with them. Yet, many usable elements are still available. Developers can utilize snap carousels, pagination, activity indicators, and models to improve user experience.

Its alternative, Xamarin, allows better personalization of application elements for iOS and Android apps individually. You can utilize the native SDKs and APIs to improve the user experience of the apps better.

Xamarin, as well, boasts of strong community support. But the types of online resources available for guidance are mostly blog posts and articles.

React Native vs Xamarin- How to Choose the Right One for You?

It is important to finally decide on which framework you should apply before beginning the development tasks. All things considered, both frameworks have a load of high-quality tools in their arsenal that ensure top-notch app performance.

Not to mention, they are under the influence of high-scale brands like Microsoft (for Xamarin) and Facebook (for React Native). So, you can easily expect a robust quality in their service, something that befits these notable brand names.

The best thing you can do at this point is to consider your project requirements. Analyze factors like the learning curve, scalability, and development speed that you require for your project. Also, consider the skill level of the developers about the APIs, concept understanding, and programming language knowledge.

Thereafter, make your choice about the right framework for your mobile app development project. Hire experienced developers to assist with these tasks.