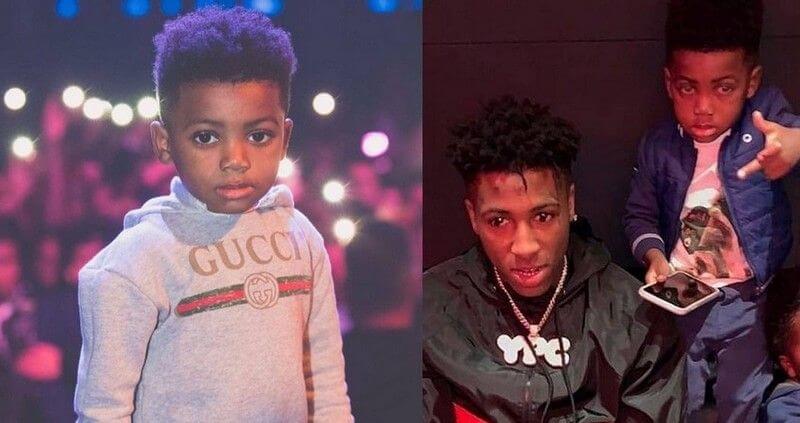 Just as they always say renowned the father, popular the son. NBA YoungBoy, an American rapper has been topping the Billboard Charts with his music for quite some time now. Besides this, his name has also sprung into endless controversial news sagas on a regular basis. A major fraction of these would be something related to his personal life. Here this piece from Lemony Blog is to cover one such prominent aspect. It is his older son Kayden Gaulden.

Just as I always say, scroll until the end to know all about Kayden Gaulden.

Kayden Gaulden is widely popular as NBA YoungBoy’s Son or more specifically his eldest son. He is NBA aka Kentrell DeSean Gaulden’s first child with his Ex. Nisha. Kayden was born on the fourth day of July 2016 in Los Angeles, United States. The 3-year-old kid from the Gaulden family is yet another celebrity kid who is always the center of the paparazzi. Just like his father, Kayden follows Afro-American ethnicity. His sun sign is Cancer. The young rapper fathered Kayden when he was just 16 years old while his pregnant girlfriend was just 14.

Kayden Gaulden also known as K2 or Dacron shares his family with his grandparents, father Kantrell besides four other half-siblings. His siblings are Kamron, Taylin, Kamiri, and Kaycey Alexander. Regarding his mother Nisha, there has not been any confirmed news about her being his mother. Kayden’s mommy Nisha has thus been the topic of debate amidst paparazzi and NBA fandom. YoungBoy’s superactive dating life has led to such confusion. However, there are airs of Nisha, Kantrell’s first girlfriend Kayden’s biological mother.

Kayden’s father NBA YoungBoy was born to the family of Sherhonda Gaulden and her husband on October 20, 1999. The 20-year-old rapper did not share any details regarding his father though. Being brought up by a single mother, he kept mum on any of his father’s information. However, as per his uncle’s statement, NBA’s father is serving his tenure of 55 years of imprisonment in jail. Back when Cantrell was just 8, his father was involved in a robbery and was sentenced to imprisonment.

Kayden Gaukden, popular as YoungBoy Never Broke Again’s (NBA) son has been in news ever since his birth. There are some debates on who his biological mother is. As per some rumors, Cantrell shared Kayden with his Ex. Nisha. There are airs of Nisha being pregnant once again with the NBA’s other child.

Kayden is known to share his family with four other siblings. They are all younger than him. Kayden was born in NBA with his first girlfriend Nisha in 2016 when they were just teenagers. As mentioned afore, the NBA was just 16 while Nisha was merely 14. Cantrell’s second child was born in 2016 too with Starr Dejanee. He was named Kamron Gaulden. The couple separated soon after a short affair. Kamron also known as Baby K is not the NBA’s biological son. However, the 20-years old rapper announced raising him just as his own son.

Cantrell welcomed his third son on March 19, 2017. He was named Taylin Gaulden. YoungBoy shared Tay Tay with his girlfriend Niya. Tay is the NBA’s biological son. A few months later, he brought into the world his fourth son Kamini Gaulden. Kamiri was too parented by Starr Denajee and NBA. Lastly, his youngest son Kacey Alexander was born on February 13, 2019, with Jania Bania.

Kayden as of June 2020 is just 3 years and 11 months old. Therefore discussing his career or professional aspect is kind of insane. However, his father NBA has been enjoying an extremely successful career as a rapper, singer, and songwriter. He is one of the top successful rappers of the era. Many of his creations found a place in the top 100 and top 200 hits on Billboard. His album 38 Baby is a recent success securing the top spot in Billboard 200. Some of his most popular creations include 38 Baby, Mind of Menance 1 & 2, No Smoke, OverDose, NBA young Beat, and Diamond Teeth Samurai.

Although Kayden is a kid and is yet to step up his career a start, his father Cantrell is definitely something. At such a young age, he is enjoying the rule over a handsome net worth of about $ 3 million. While the NBA is just 20, his success is way ahead of his age. This sum of fortune is undoubtedly bound to raise several folds in the upcoming years ahead.

Some FAQs about Kayden Gaulden & His Family

While the NBA is still a sensation worldwide, it makes sense to look at some FAQs related to him and his family. We shall also look up to ones related to Kayden Gaulden too. Some of the most frequently asked questions about Kayden and his father NBA YoungBoy are as follows:

How old is Kayden Gaulden?

When was he born?

Who is Kayden Gaulden’s mother?

Who is Kayden Gaulden’s mother’s age?

Nisha is presently 18 years old. However, she was just 14 when she mothered Kayden.

Who is NBA YoungBoy’s first girlfriend?

How old was NBA when Kayden was born?

He was just 16 years old when Kayden was born.

How many girlfriends does YoungBoy have?

YoungBoy NBA has been quite active regarding his dating life. He has also had many affairs too. However, there ain’t any exact figure available about his number of girlfriends.

How many kids does he have?

NBA presently is the father to five kids. However, among those 5 Baby K is not his biological son.

Is Kayden alive or dead?

Kayden is well and healthy. He is also alive.

How old is NBA YoungBoy?

No, he is still unmarried.