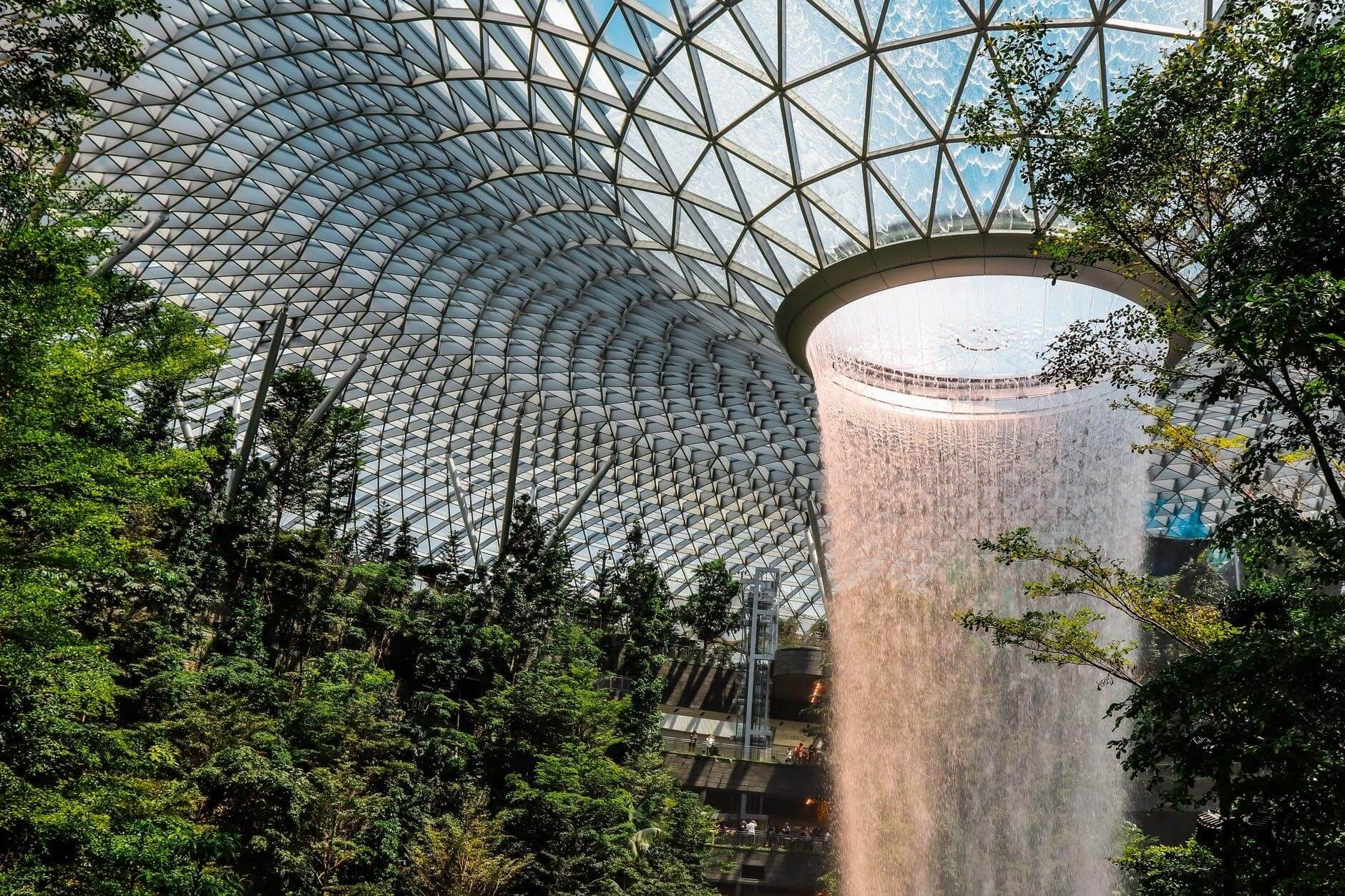 As part of the development of Jewel, a key highlight that we’re excited to announce is the first-ever indoor Canopy Park at any airport in the world. This will take up about five floors and house more than 500 species of flora from around the world! Visitors will be able to enjoy close-up views as they learn more about various plant species, discover different plant habitats, and interact with them. The Canopy park at Jewel Changi is designed as an immersive journey through lush vertical gardens and unique installations – visitors can look forward to walking through a bamboo forest and exploring a flower cave, among other themed experiences.

Wrapped in glass, the Canopy park at Jewel Changi forms a square with corners marked by towers – eight stories high at the edges and 12 levels in the center. In between is a central “core,” which houses lifts, stairs, and services for the mall and escalators connecting all four floors of shops.

This core extends up to level 8 from the ground floor, housing hotel rooms on levels 7 and 8. The remaining levels from 9-12 have house offices.

I was expecting something similar to Tokyo Midtown or one of those Japanese department stores, but this looks nothing like them!

The main entrance pierces through all four stories and extends above them too. This is reminiscent of the Burj Khalifa “At The Top” attraction, and I don’t know what to think of that just yet. However, it does look nice at night:

I’m not sure if the glass exterior is part of a facade or a curtain wall construction, but it looks good against the trees.

The interior layout, as described in the article, seems confusing, but below is an unofficial schematic from someone who had been there before.

Does this mean there are 16 levels? No, because some floors have less than eight shop units due to its surrounding walls blocking parts of the space. So I’m going to assume that there are nine levels, including the basement.

As far as I know, this is a record number of storeys at a shopping mall in Singapore, which has me worried. It’s hard enough to find shops here, but how can anyone expect shoppers to go up all those levels? Will they have their lifts/escalators for each level? If so, will they be marked clearly or hidden among retail or office space? The MRT station serving the mall is one stop away from Redhill, which could work, but I’m still wary, especially when even Tokyo doesn’t have any malls like this (not counting Tokyo Midtown).

Changi Airport is getting crowded with three additional terminals opening next year, and competition from other regional airports will also be getting more intense. I hope this new mall can find a niche and set itself apart from the rest of the malls here, but at the same time, not too distant from them either. We’ll see about this in 2016.

Canopy park at Jewel Changi connects a series of LEGO brick sculptures designed by artist Sean Kenney, featuring animals and plants worldwide. It is made up of 28 different art pieces, each inspired by nature’s beauty. Created using thousands of LEGO bricks, there is something for everyone within these sculptures that truly capture life in its various forms!