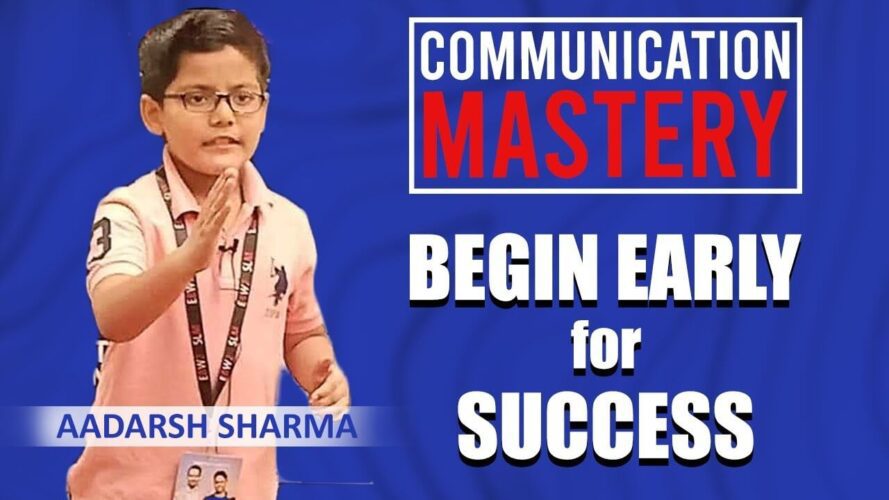 Gone are the days when they said to let kids remain kids. Gone are also the days when they said childhood is just about play and a carefree lifestyle.  Just as the days pass on to a new beginning, we see hundreds of super kids coming out of the crowd. One such kid is unexpectedly a little too young Aadarsh Sharma. This 9-years old Delhiite is the kid from the future. While other kids around 9 or 10 years run behind toys and television, Aadarsh is an entrepreneur and a public speaker. Yes! You read it right. At the age when kids enjoy elementary schooling and make mommies run behind them to complete basic routines, Sharma boy makes his parents proud.

When I first read about the little Sharma boy, I myself thought of it as some sort of balderdash. But you see things aren’t so. For a mind that is supposed to fight over snacks, when you witness it performing some really grown-up deeds, it’s worth appreciation. So here is a piece from Lemony Blog focusing on Aadarsh and his really cool entrepreneurial idea. Do not forget to scroll until the end and read this work. Let’s get to it.

Who is Aadarsh Sharma?

Aadarsh Sharma is a young kid born on 15th March 2012 in New Delhi, India. He was just too young when his public speaking skills caught the attention of the masses. When he started his Super Kids Mastery program, his work grabbed attention through several social media platforms. Aadarsh presently lives in the New Delhi Area, Delhi, India. He is an Indian citizen and follows Hinduism as his religion.

There ain’t any personal, family, or background information available about Aadarsh on any of his social media handles. Those platforms mainly focus on his establishment of SKM. We would try to dig in more about Sharma’s personal information. The update would be followed thereafter. While there is no aspect of Aadarsh’s sweet little personal life available to cover, we shall keep our focus on his work. Therefore we would discuss his Super Kids Mastery program. We shall also cover what this SKM means and what its target to achieve.

Aadarsh’s social media bio briefs about his work. It describes him as a public speaker wizard who can help you out in the digital world that is changing rapidly. He requests for himself a chance to change the world around him with his work. One of his most loved mottoes is “FlyerK.” “FlyerK” is the abbreviation for ‘First Love Yourself, Effort Results is Key.’ In a webinar, Aadarsh shared how the idea of SKM hit his mind when he realized one of his bad habits. He said that his habit of watching television while eating made him suffer loads of teasing from his peer group. That’s when he decided to overcome his negativities and direct them towards the ultimate good.

His idea behind SKM is to develop in young kids the art of better communication. It focuses on empowering youngsters to manage their own works in an even more effective and professional manner. 5 mantras behind SKM are:

Aadrash is seen posting educational videos on his social media accounts every now and then. He also owns a Youtube channel and has posted about 93 videos there. All of Aadrash Sharma’s social media handles including LinkedIn, Instagram, Facebook, and Youtube have several hundred followers on the list. Well! It’s really surprising how a kid as young can actually be so smart and intellectual. Kudos to him! Let’s now try to understand what this Super Kids Mastery Program is.

What is Super Kids Mastery?

The Super Kids Mastery program is a kind of online course started by Aadarsh Sharma. It focuses on developing the young kids from today into the super kids of tomorrow. But one question that first hits the mind is that what is a super kid? To go by a simple definition, a super kid is someone who surpasses other kids in terms of regular skills. That’s what Aadrash, who himself is quite a young kid focuses on. His program revolves around the aim of developing social and communication skills in young kids. This would help them perform better in the race of life ahead.

As defined by communication specialists, Communication Mastery in general concerns around:

It’s really hurtful to regret a failure that happened because you did not have social or communication skills. How do you think you’ll react to one such of your failure when you are around 30 or 40. Give it a thought. So instead of waiting to reach your high time and regretting it, why not start today. For once a great man said, ‘It’s never too late to begin and always too early to quit.’ Take time to invest in your kid’s mind and personality.

The SKM program founded by Aadarsh helps parents and students become superlatives of themselves too. The Delhiite defines the key to developing your child into a super child through 3 aspects.

He says you should focus on altering your negative habits into positive ones. Sharma also suggested an Uninstallation < Reinstallation < Integration.

Aadarsh Sharma explained his basic vision behind starting his SKM program. It goes as:

There are certain things that affect a kid’s mindset and influence his personality. This could, in turn, impact his professional growth. Parents, school, environment, society, peers, habits, and observation as a wholesome package impact the child’s mind. Here is how SKM works in altering those ill impacts into positive ones. Kids are a sort of ball of energy that needs direction. You as a super-parent should work in an organized manner to be the director of the energy. You should thus:

Top 5 Steps To Be Super Kid

One should work on achieving his/her target on a regular basis. He should also keep a proper check on his progress. Aadarsh specifies the top -5 steps as follows:

What All Aspects Does SKM Cover?

Here is a brief list of all the aspects that Aadarsh Sharma’s Super Kids Mastery program cover. Through his online lessons and guides, he aims to induce the following points in his audience.

While Aadarsh Sharma himself is a super kid, he aims to empower millions of others to do so. At the age of 9, he is the founder of the SKM program. His program continues to gain popularity as the days pass on. He is appreciated by everyone who comes across him. Aadarsh is mentored by Communication Specialist Rahul Bhatnagar. Bhatnagar once shared and promoted his mentee Aadarsh’s work on his Youtube channel and appreciated him. The best part about the 9-years old entrepreneur is that his program targets not only kids but adults too.

Keep visiting Lemony Blog for more such pieces. You can find biographies of some of your favorite celebrities here too. Don’t forget to comment below with your feedback.